Wednesday, I hitched up the trailer, and true to form, the lights weren\’t working, I must have spent half an hour or more trying to resolve the problem, usually it\’s the earth wire, but not this time.

I decided to take the risk, if I was stopped by Transito (Traffic Police), it could end up with a big fine, but there again, hardly anyone in Colombia uses indicators, so I would be just one of the crowd.

I therefore set off for San Juan in Medellin, to buy the UPVC roofing panels I intended to use to finish my fencing, my last post explains why, I needed panels that matched, and it was a year or more since I bought the initial panels.

Anyway on my arrival, I found the panels I needed, but they are 5.9m long, so I needed them cutting, the Assessor told me they they didn\’t cut roofing panels any more, I put on my \’help me\’ face, and explained that without the cuts, I couldn\’t get them home, so he said, well if I bought them now, he could have them cut for tomorrow…no, still no good, more \’help me\’ face, I told him that I didn\’t live locally, ,and he came round and said OK, if I went and paid for them, he would get the guy to come and cut them now…Result!!

I had the panels cut down to 2 x 2m and 1 x 1.9m, and they slotted nicely into my trailer, so I gave the lads a tip, and headed home, having first done my shopping in Makro.

I stopped off for brunch on the way home, and the parking attendant asked if I wanted to sell the trailer…no thanks, I know him, as I am a regular, he is an old chap from Peru, so I told him I was having problems with the electrics, no problem he said, you can see the car lights, hmmmmmm, maybe at an angle, but I am not sure Transito would agree! Anyway, then it was home, unload the panels, and day done.

Yesterday, I had Dentist at 8am, but they have a weird system here, it\’s a good job I don\’t have to work for living, you go for an evaluation, if anything needs doing, such as in my case, cleaning, you then have to go to Reception, to get an order, return to the Dentist, who takes the order, and you are told to ring back in three weeks for an appointment, which could be the following day, or three weeks again, it is a Royal pain in the backside.

Today, it had been my intention to do some rendering of a stone wall down below out property in the neighbours lane, but their two cars were exactly where I needed to work, so I gave that up as a bad job, and decided to start installing the roofing panels, along my fence line, the idea being it will stop the hedge growing through onto the neighbours lane, as they are going to restrict access, by putting up gates… so they said!

I started installing the panels, but it was obvious that the only easy way was to cut back the hedge, hard 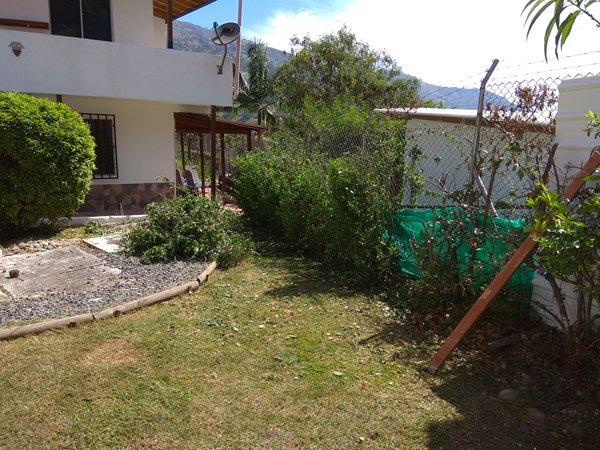 It was looking really sorry for itself once I had finished, I just hope it regrows again.

I managed to get all the panels in at ground level, and some of the upper panels, it would have been easier with two people, but you work with, what you have, it wasn\’t made any easier by it being absolutely baking hot, it was like working in a sauna.

At 12.30pm, I couldn\’t continue, but I was happy with what I had done, and Boss Witchie Poo, from the house causing this expense, had passed and made favourable comments. 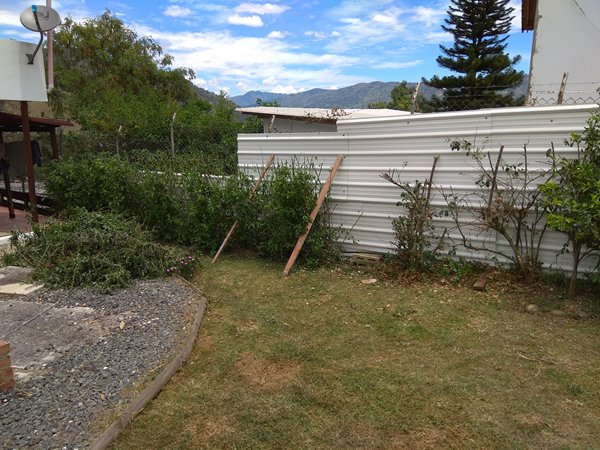 I am hoping to get the job finished tomorrow, weather allowing.

I had just showered and had my lunch, when one of Witchie Poos daughters, called me, and asked when I intended to clear up the hedge cuttings on their side, I told her, that I had already cleared them into a pile, I would remove them when the job was finished, and that I had no intention of removing the rubbish, whilst their cars were parked blocking the lane, as she would be the first knocking on my door, saying I had damaged the cars, whether I had or not. I was fuming, and to be honest, thinking about just leaving the rubbish for them to clear, I told her that her Mother knew what I was doing, and was happy with the work, she should talk to her, she was lucky I bit my tongue, because yes, I can tell her where to go, in Spanish!

When Marcela and I were messaging during her lunch, I told her what had happened, due to our recent run in with the family, and she was straight on the phone to the B—h! and I believe she was told to, wind her neck in!

That\’s me finished for today, now to see what tomorrow brings.