When I went out with the boys this morning, it was obvious that we were going to have a hot start to the day, so getting going with the concreting was a priority.

After a quick breakfast… can\’t do a thing before at least two coffees! out came the cement mixer and all the tools I was going to need, by which time it was already warming up.

Five barrow loads later the gully was completed, that sounds as if it took no time at all, but I had a number of delays due to Pépe feeling very amorous this morning and spending his time trying to give me kisses, no amount of persuasion would make him go away, and it didn\’t help when Marcela surfaced, and just stood there laughing! 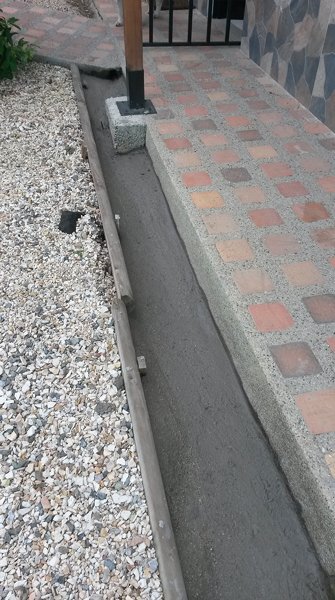 Hopefully having first lined the gully with plastic, then with a good slope on it, and sealed to the concrete side, it will at least reduce the problem we were having.

Having finished that, and the cement mixer out, I decided to concrete the patch behind the gazebo, that took another three barrow loads, I have tiered the plot into three, and pressed gravel into it, hopefully that will stop the dogs messing it up. Although I have to say, Pépe did not look too impressed!

Once the concrete has gone off, I will move the blocks and board, and decide how I am going to face it.