I have been feeling a bit sorry for myself these last few weeks, no sooner than one ailment resolves itself, and another raises it\’s ugly head, I seem to have got myself into a never ending circle, the only good thing about it all, is that I know there are plenty of people worse off than myself, so I keep trudging on.

The problem with my knees and back, meant I was not walking properly, that in turn caused me to have hip pain, as a result, I haven\’t been sleeping at night, because I can\’t get comfortable.

Looking on the bright side! the weather has picked up, we are in another summer, and it has been hot during the day, and only wet at night. The result of that has been heavy mists in the early morning. 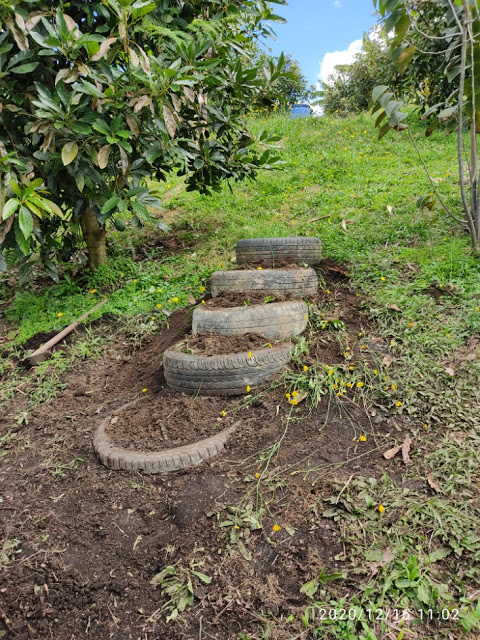 I haven\’t yet mastered this, because they are starting out fine at the bottom, buried underground, but by the time I am five tyres up, I am above ground, I am going to have to play around with this to get it right. I won\’t install any more until that\’s done.

Then it was time to prepare for Christmas, there was a certain amount of uncertainty, because the rumours were that we were going to be in total lockdown again, but in the end, there were minor restrictions in place, nothing that stopped the family coming, thank goodness, Marcela would have been murder to live with if that had been the case.

We have had a relaxing time, my Sister-in-law and her husband had to leave on Sunday for work, and will be returning tomorrow, for New Year, leaving my Mother-in-law and Nephew here for the week.

During which time I have been back down the orchard doing some fencing, many of the post were rotten, they needed replacing, a couple I did before Christmas with the petrol auger, but it really doesn\’t go deep enough to make the posts firm, carting the auger up and down the hill, was also doing my back in.

I needed to go into the neighbours garden to clear all the rubbish growing over the barbed wire fence, since no one is living there at the moment, I made a discovery, someone has been trying to take our land, the bases of the broken posts were clearly visible at the bottom of the bank on their side, but someone had pulled the posts to the top of our embankment.

I went back and collected together all my fencing tools and set to work, I wasn\’t leaving this for another day, or I risked losing land permanently. 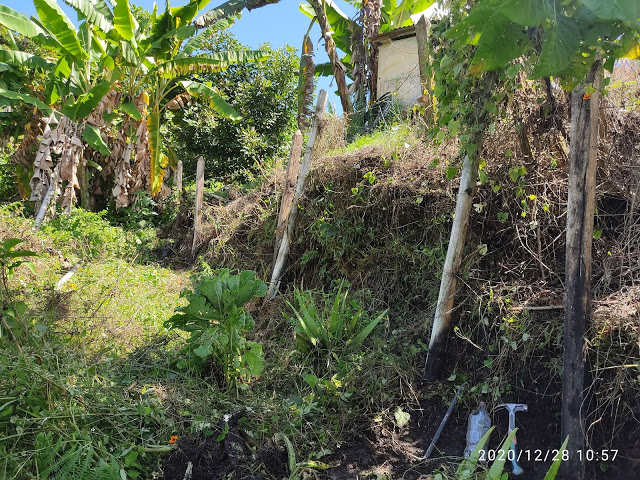 I left the old posts in place, whilst attaching the new ones, it was like having another pair of hands, you can see one of the posts still in situ at the top of the bank to the right of centre.

further down the hill, it appears the boundary does indeed come  up the bank, but as it\’s not so steep, it\’s not as noticeable. since I couldn\’t find the old post bases, I left them where I found them. 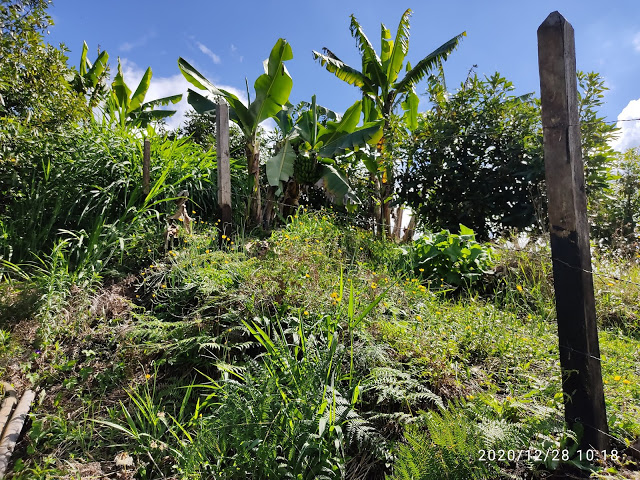 Now I need to continue down the hill, before anyone tries to claim any more land.

Today, I spent the morning at the Docs, it was time for my regular Blood Pressure check up, fortunately all went well, and the weight, I thought I had put on over Christmas, was only what I had lost since seeing him last, as it registered no weight change!

The Doc is sending me for radiography on my knees, to see if I need the insides cleaning again, or whether I need knee replacement, that will be interesting! He also gave me an order for an eye test and for a dental checkup, as we haven\’t been able to get an appointment, they are only doing emergencies, unfortunately even with the order it didn\’t help, telephone appointments only, which when your problem is your eyes or your teeth seems absolutely ludicrous.