Well that\’s not quite true, although I know Marcela would disagree with me, she has been on bottled water since we moved here, but since I mostly drink coffee, my water is heated, and for taking tablets etc. I take the risk.

When we moved, we noticed that the water had a yellow tinge to it, not to be too blunt, but it looked like urine. 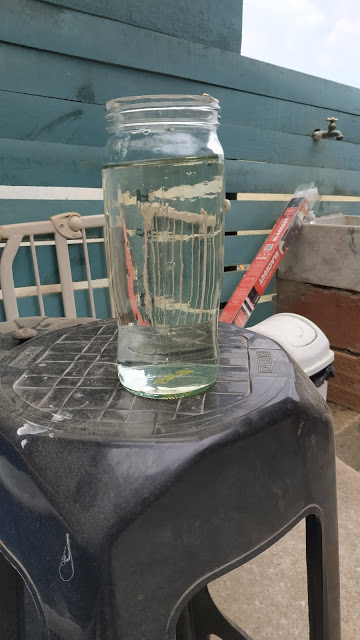 The Water Company insisted that it is potable / drinkable water, and who are we to argue, but it doesn\’t make it look any better, so I made the decision that I would install a water filtration system, however with the total lockdown, that was going to be somewhat difficult.

I started by deciding on the location for the system, excavated until I found the pipe,  and left it.

I had to decide where I went from here, I needed to build an enclosure, to house the system, and realised the solution was staring me in the face. The existing BBQ area was built out of handcut sandstone blocks, with a concrete top, which was going to be demolished, to make way for the new laundry area.

I carefully dismantled the BBQ, and then rebuilt it around the exposed pipe, on a prepared concrete base. 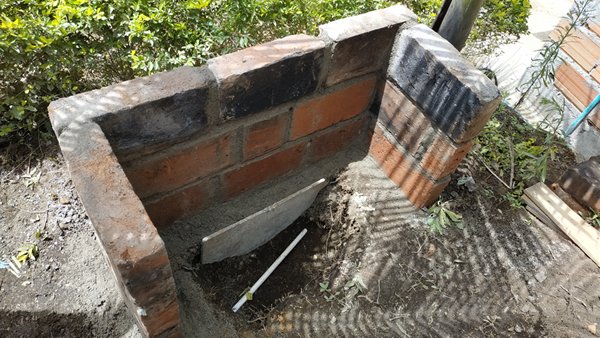 I had just enough blocks, to cut the last and put another half block on top of what you can see here, then I cemented the old concrete top in place.

While doing all this, I was making inquiries with various Companies to see if I could get a system delivered. Again the problem here, is that Couriers will not deliver to most rural properties, unless you have an asphalt road access, which we don\’t, and that you have a recognised number for your property, which we don\’t. Fortunately our friend Omar, who lives in town, agreed to let us (me) use his address. In time the Water Filter System arrived, and another delivery from Homecenter arrived with all the plumbing fittings I was going to need, after which I was able to get on with the installation, I went for the 20\” Big Blue system, so the filters, although more expensive, should not need changing so often.

I also installed a bypass pipe, just in case there is a problem with the system, we won\’t be without water. 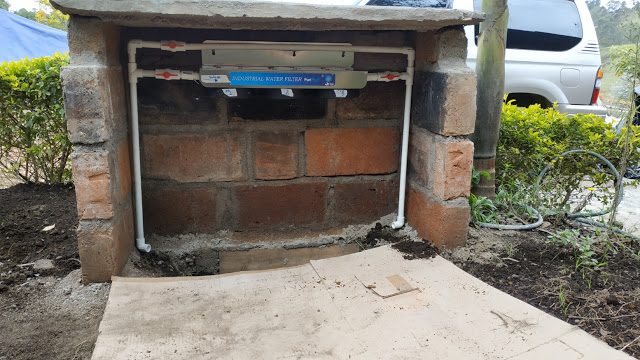 The glass on the right, being what we have now, there is still a slight tinge, but as I discovered in another project to be posted here, the pipes are lined with red soil, which will take a while to wash through, but now I am happy we can drink the water without being poisoned.

I have encountered a slight problem with my design, in that we use our water to water all the trees during the dry months of the year, I don\’t want to use the filters for this, otherwise I would have to change the already expensive filters far more regularly, and if I used the by-pass, I would be lining the pipes with soil again.

I had a brainwave, to dig a trench to our perimeter from the pipe between the meter and filter system, then down the side of the house to the garden, and install a tap. Weeks passed, and the Builders came back, (more on that in a later post), but talking to Jaime, he has suggested that instead of digging a separate trench, wait until he installs the security fence, and run the pipe in the trench he will have to dig to install the fence base, great idea, and no back breaking work for me! He also suggested, I could then extend the pipe on down the garden, putting taps and hoses at strategic points down to the abyss, to make life easier.