Whilst all this building work has been going on, you might think I have been sitting back and Lording it!  Not a bit of it, there is plenty to be done.

We have a large garden to tend, there are 50+ Avocado trees, Platano (cooking bananas), Banana Bocadillo (small sweet bananas), Mandarins, Lemons (Not yellow sour lemons like we know back in the UK, these are almost indistinguishable from oranges), Yuka, Tree Tomatoes (these are being removed), Lulo, Papaya, and more, I can\’t even think of.
The idea is that Marcela will run a small market garden, mainly selling the avocados, she is learning off a local Gardener we have employed until we know what we are doing.

However this garden is not just on a slope, it is on the side of the mountain, and almost vertical. 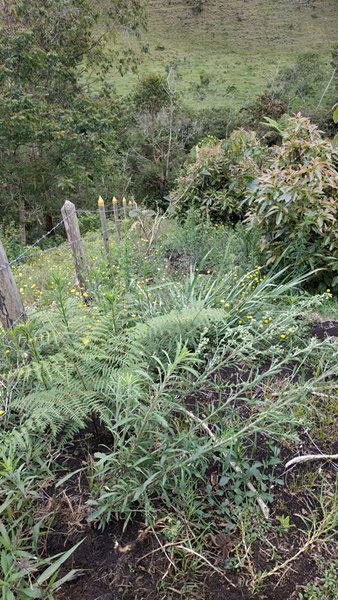 It was obvious at the time, as in this photo, that no one had ventured down there for some time, and it all had to be cleared, we have snakes! and I don\’t like them, any more than they like me, so it was not something I was looking forward to, but it had to be done. I have a brushcutter, so taking it a step at a time, I started up by the house and worked my way down to the bottom, over three days. 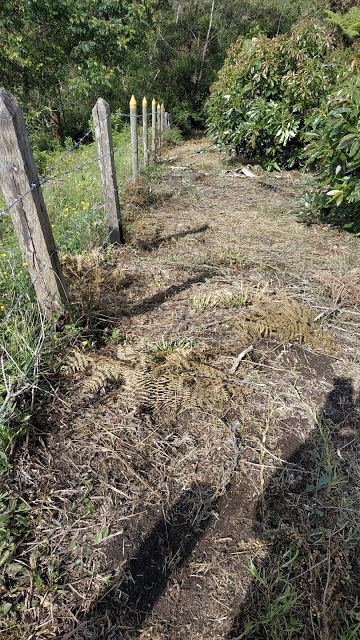 Whilst down in what I have termed the abyss, I made a discovery, we have a lodger

What is living in there I have no idea, a few days later I found another on the other side of the garden, whether they are connected or even of the same species, I have no idea at the moment, but I intend to find out.

Climbing up and down the abyss, with the brushcutter, was to say the least, dangerous, much of the time going up, I would encounter loose dirt, and slide back down, so something had to be done.

The garden is divided into three, each having it\’s own slope, the top part near the house is gentle and easy to walk, the middle section, which houses the septic tank, is fairly steep, you have to be careful, then there is the abyss…say no more!  I decided that the bottom two levels needed steps cutting into the hillside, and it wasn\’t going to do itself, so I had to get going, and as my new neighbour Camilo keeps telling me, you don\’t have to kill yourself doing it, you have a lifetime, yes, right!

I decided to work into this slowly, so selected the middle tier to start work on, it was hard going, I would start immediately after an early breakfast, so I was working before the sun came out.

It took me about a week to cut these, once the lockdown is lifted I will buy some timber to face each of the steps, until then I just have to be careful not to step on the edges.