We had a broken night again last night, thanks to the Finca de Recreo alongside us, but fortunately the rain kept them in the main house for most of the night so we did get some sleep, the problem wasn\’t music this time it was the people screaming, you would think that at some point they would want to sleep, but it appears not!

We left home just before 11am to go and pick up the sisiter-in-law, my nephew, and mother-in-law, and then we headed off to Medellin  to \’Fondas de Mi Iierra\’, el Parque Comfenalco de Guyabal. 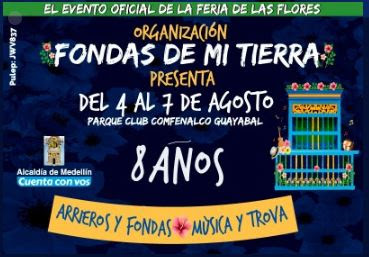 I was told that stands were set up from all around Antioquia serving food from their region. We arrived, and parked in a side street, the parking was run by the local Sicarios (Drug dealers / Killer for hire / extortion), and we ran into a couple of Marcela\’s cousins I had never met before, who are Sicarios, it is strange, but every family has these connections, and people think nothing of it, they were certainly friendly enough, but that was probably because I was with Family, they could well be useful people to know in the future if our problems don\’t go away…I wonder if they do family rates?

Anyway, it was then into the event, I had bought the tickets beforehand, so there was no waiting, but I have to say the event was a bit disappointing, as has been every event connected with the Feria de Flores that we have been to, with the exception of the year we went to the Jardín Botánico (Botanical Garden), and it is not the event itself, it is the total lack of organisation. Maybe if I can lower my standards, I might actually enjoy the visits, but today even Marcela was seething, there were five of us, and we went for lunch at one of the kiosks, to put it bluntly they ripped us off, for two plates (the size of side plates) of pork, and four drinks it was $80,000 COP, if it had been meat it wouldn\’t have been so bad, but the majority of it was fat, which to be honest, I like as all the flavour is there, but I was the only one.

We left there hungry, so had to spend the same again, eating at various kiosks until we had had sufficient. We then went into the main venue, and the girls had a couple of beers and listened to the live music, I nodded off. We left about 3.30pm and I took the family home, before we then returned to two very excited dogs!

I took a couple of photos with my 360º camera, but I cant do anything with them until I get my new mobile phone, as they can only be downloaded via the phone.