We are both knackered this morning, there are people in the Finca de Recreo alongside us, and our walls were rattling all night!  Marcela spoke with the Police at 11.30pm, asking if they would visit at some time when in the area, she also sent a message to the Secretaría de Gobierno de Copacabana, but received no response. At 12.50am the noise was unbearable, I tried ringing the Police but there was no response, so I also messaged the Secretaría de Gobierno, it showed she read the message almost immediately, but I receive no response, and there was no change for the rest of the night. I had my headphones on playing background music, but it made no difference.

I got up at 6am, took the boys for a walk, it was grey and dismal, I think our summer is coming to an end, and the rainy season is upon us, now we just have to hope that the next three months passes quickly, before the next summer arrives…hopefully!

The first job of the day was brushing Tito, as he is suffering from dandruff, and brushing twice daily seems to be sorting it out, but both the boys hate being brushed, even so when I brush Tito, Pepe appears to interfere, so we make a game of brushing with a soft brush.

It takes a while longer, but they seem to have fun!

After that it was time to get in the swimming pool again, so out came the multi-tool

I then started scoring the tiles, but they seem to be really hard, and the tool was heating up, so I left it for today, then will come the part I am dreading… 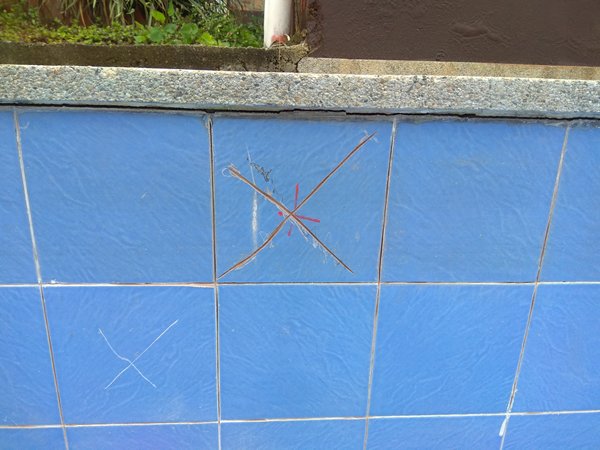 drilling them out, and seeing what work will have to be done behind.

Soon be time to shower and get ready, we are going out for lunch, if nothing else, just to get away from the noise from the temporary neighbours, hopefully they will be going about 5pm.

Now the immediate problem with Enimigo is resolved, we are going to return to our battle with the Town Hall over the Fincas de Recreo. We thought we had found a way to bring this to a head, by involving the Policía de Tourismo, another department of the Policía Nacional de Colombia, but they replied to Marcela last week, stating they had to work in conjunction with the Town Hall, which was really depressing news, in four years, we have got exactly nowhere, time for the next battle.