Yesterday was work, firstly I painted over my repair-work on the swimming pool wall, it was just a quick cover up, when the weather is better, I will repaint the whole wall. I then finished replacing the roofing tiles, acting as coping stones along the top.

It was then time to clean the swimming pool, which with all the storms we have had in the last week, was looking decidedly grubby, and we have a man coming on Wednesday to see if the pool is worth repairing, and if so how much, including the installation of a pump and filter, we have already decided that installing a new pool is out of our budget, if the same goes for the repair, or he says it is beyond repair, then we have decided to fill it in, it will reduce the value of the property, but … 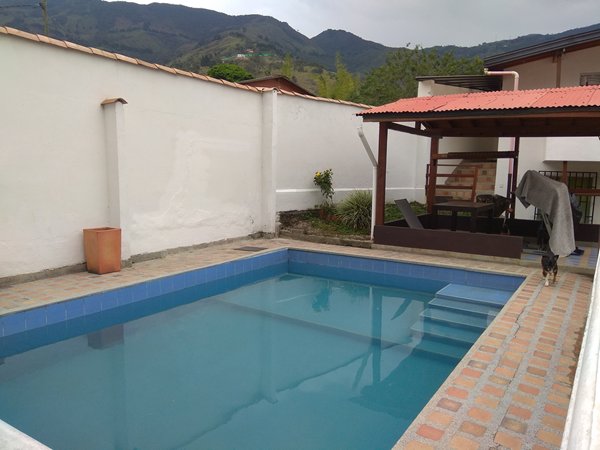 Now at least we can see the bottom!

Finally, I had to adjust the guttering on the gazebo, with land movement, the water was now flowing to the wrong end, but unfortunately whist taking it apart, I broke the retaining tabs on a couple of the fittings, having become brittle in the sun, so I am going to have to buy new!

I packed up about 12.30pm, and was lucky I did, as the clouds came over and the rain came down, which was a bit of a bummer, considering, I forgot to wear my hat during the morning, and burnt my head!

This morning, I cut the grass, and trimmed the hedges, after which we showered and went out for lunch at a new Restaurant that has opened down the road \’La Curva del Gordo\’ most of the menu was quite pricey by Colombian standards, but what we had was very nice, more on that on my Restaurant page.