This morning I was just returning from walking the dogs, when I saw one of my neighbours from down the lane, both their cars were on the road, which was ideal, so I asked if it would be OK to finish the pointing and rendering, once I fed the dogs, he said it was fine, so that was my morning planned.

Three and a half barrow loads of cement render later, the job was done! 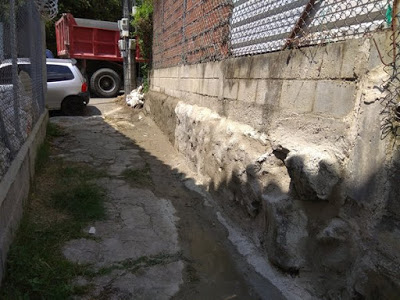 Not a lot more to say really, it\’s not pretty, but it is what I wanted, the wall is now secure, and the neighbours have made favourable comments, well it does look better than before, there is no longer access for wasps and rats, which has to be a bonus.

I used the other half barrow load of cement to do some running repairs, then cleaned up, had my shower, and another day done!

Now to see if we have to suffer with music from the surrounding Fincas de Recreo, I have seen a few Tourist Buses heading up the mountain, so someone is going to get the noise.