Yesterday, we went and had our photo session, we\’ll have the results on the 19th, then I have to make some frames… Always something to be done!

After the Photo session we went and had a very nice lunch, 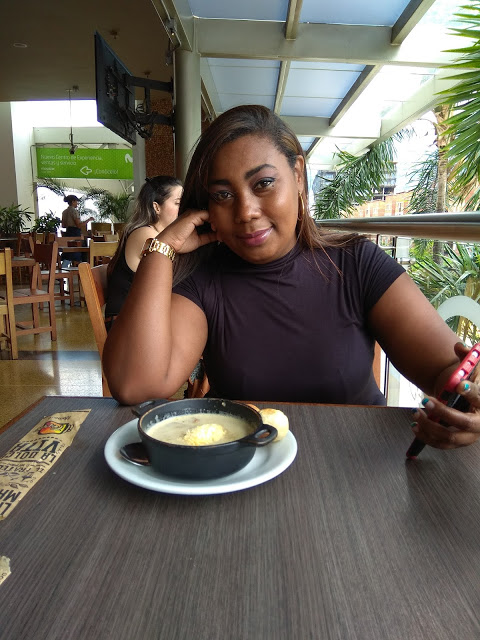 we both had the same, which to be honest is not unusual, we have similar tastes when out dining, we had cream of mushroom soup topped with grated cheese, followed by a chicken salad, which is not my usual choice, but you have to be good sometimes!

Back home, it was time to relax.

This morning I was up at the crack of dawn, ready for Diego\’s arrival to finish the workshop roof, and also to have the rubbish out before 6am for collection. To be honest, I am glad we have a collection twice a week, Monday and Thursday, but it is a good job, I always get up reasonably early, because there would be no chance of Marcela getting it out on time!

I put the rubbish out, then prepared the aguapanela (sugar cane heated up with water), ready for Diego\’s coffee, nearly all the workmen drink tinto, which when I was in Spain, was a red wine, but here it is a small strong coffee made with aguapanela. I put it on the heat, and then made my milky coffee, and went upstairs to the office.

At 7.45am, the bell went down at the gate, I confirmed it was Diego on the security camera, and went downstairs, to see smoke pouring under the entrance door ( access to upstairs, if you hadn\’t already worked it out, is via an outside staircase!) I opened the door and couldn\’t see a thing, I think you could safely say that the aguapanela had boiled dry, and some.

After letting Diego in, I went back to the kitchen, opened all the downstairs windows, and having let the pan cool, I turned out the contents. 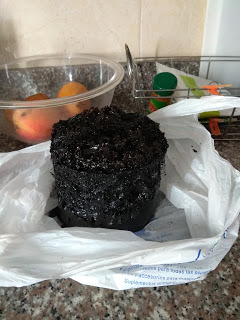 It was weird, very light, and crumbly, but not how I expected to find the pan when I lifted the lid. I have to admit that we were lucky not to have had a fire, the worrying part is that this isn\’t the first time, I have forgotten something on the stove recently.
I then spent the morning tidying up in the garden, cut the grass, picked the oranges, which to be honest compared with the trees I had in Spain, the fruit are pathetic, but I think that is down to the ground they are in, rather than the trees themselves, I also powerwashed the swimming pool cover, which we no longer use, as we either have to clean the cover and the pool, or just the pool on a regular basis, so just the pool seems like less work. With all the construction on the mountain, there is permanent dust floating about.
Diego finished the workshop roof about midday, and having been paid, made his way home, having already lined up more work for sometime in the future. The swimming pool wall, I thought that maybe next year we would have to take it down and start again, but Diego assured us there is a permanent solution, that only requires extra columns building into the wall, so we shall consider that, probably next year, after our holiday in February.