I said there would be no more on the septic trap, until it was finished, but I am getting no where fast, and at least it was a little bit interesting today.

Having received my endoscope, it was time to put it to use, as the leak seems to be getting worse, I definitely need to get it sorted one way or another.

The first order of the day was to run the camera from the septic trap.

It was a pleasure just lifting the wooden top, instead of giving myself a hernia with the concrete one, wellies on, and into the trap.

The camera had to be inserted into the pipe in the left corner of the trap, and this is what I saw:

Not a lot it was remarkably clean after my efforts last week, the cable went in about 4.5m, which took it into the middle of the dining room, or what was the original kitchen when we bought the place, everything looked fine, I was somewhat limited on manoeuvrability, because the camera cable is too pliable, I had to attach it to my fish tape and push it down the pipe, it wouldn\’t rotate, but I don\’t believe the problem is in this section.

That took me back to square one, so I re-opened up the holes in the side of the house 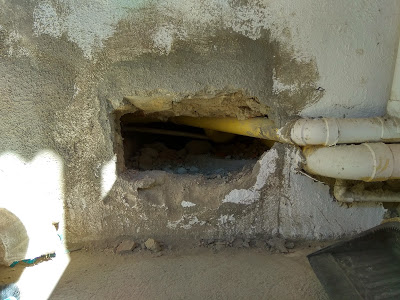 I dug out more rubble from each of the three holes, and it was as dry as desert, I even put the endoscope in, attached to a broom handle to have a look around, and there was nothing.

Everything points to it being from this hole shown above, which is where all the connections meet, and go to the trap.

I went down into the lane below, and you can see where the lichen had been growing. 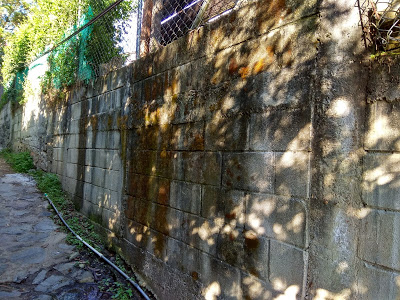 it\’s now brown, because I have sprayed it with weed killer, but it would seem to indicate this is where the water has been building up, albeit the blockwork is not wet to the touch.

I have made the decision therefore, that my only option is now the one I didn\’t want to take, that is to link the drain pipe to the rain water down pipe, which is about 2.5m away. That will mean cutting the existing pipe just to the right of the hole in the wall above, and taking a straight run to the downpipe. That would leave just the downstairs shower and handbasin on the existing run. I think I may be able to cut into the shower u-bend and bring that in a separate run to the new pipe, which would leave just the hand basin, but I am not yet sure.

As I was beginning preparations, Diego rang Marcela, I had all but given up on him, as he had said he would try to come last Thursday, now he is coming first thing tomorrow, so unless he has a brainwave, this is what we will be doing.