I have been put to work, and finding it frustrating that I am limited in what I can do. Marcela is opening her first shop next week, it will be primarily a Stationers, but also selling her costume jewellery. The idea being to give her mother employment, because due to health problems she isn\’t going to be able to work in her current employment as a Seamtress until retirement, Marcela will share the time spent in the shop, and continue working on the road selling the jewellery to other shops.

Therefore she needs, stands for the stationary, on a tight budget. I thought of plywood/triplex, but as most of it is imported prices have shot up. My next preferred material was MDF, until I went to buy it, when I saw MDP, I haven\’t worked with it before, but, it should certainly be strong enough for the job intended, so MDP it is.

On Monday I went and bought three sheets of 15mm 183cm x 244cm and one sheet of 12mm the same size, and because of the size I paid for the initial cuts to be made. They told me it would be ready for collection at 2pm on Wednesday.

Wednesday came, I arrived at 2.10pm with my trailer to find they hadn\’t even started cutting, I was not happy, \’Our fault, sorry, we\’ll have it ready in an hour\’, yeah! right, they had it cut for 3.15pm, then I was kept hanging about until 3.45pm until it was loaded on my trailer, as you can imagine, I was not a happy bunny.

Yesterday, I started work, the first job was to work out what I had to cut out of what pieces, because although I had gone with  a printed cutting sheet, showing which pieces were where, I had done that on the premise that they would be using a 3mm saw blade, and they use a 4mm, so the layout was different. Once that was done it was fairly easy to get going.

Firstly I had to set up my machinery to do the cutting, and that meant having enough support, 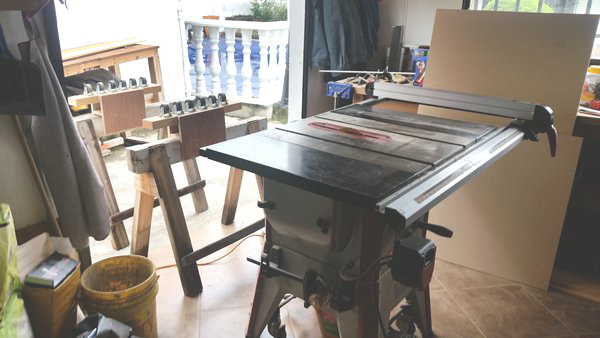 I only had one biggish panel that needed cutting down, and I didn\’t want it to snap. 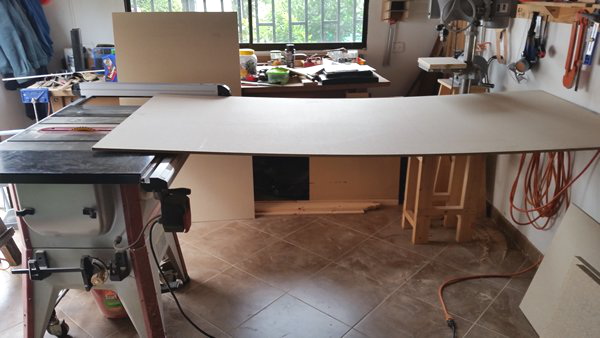 As you can see, space is a bit tight, I wanted to keep the sawdust to one end of the shop, 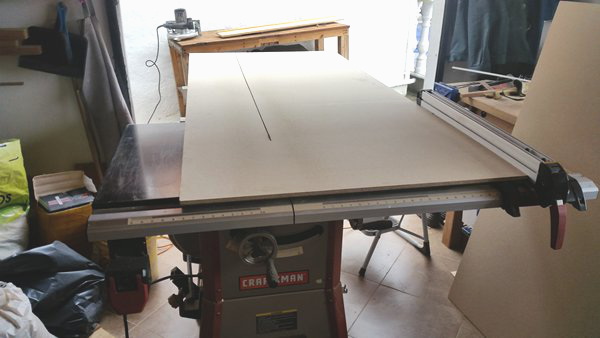 Once I had the cut started and onto the rollers outside, it was easy.

The rest of the day was spent cutting panels to size, for the frame, shelves, supports, uprights etc. Once the cutting was complete, I then routed the channels in the shelf to accept the upright supports, which hopefully will stop the shelves from buckling under the weight of the stationary.

By 4pm I had finished, and had one flat pack shop display ready to take to the site. 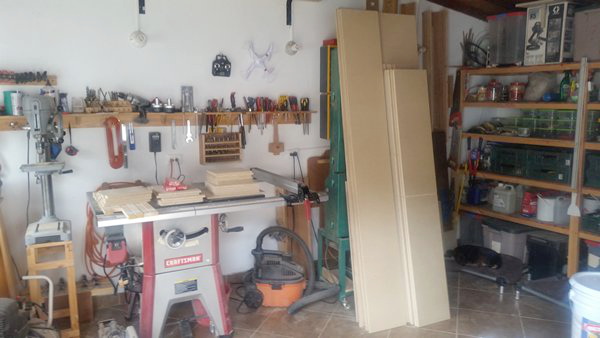 It doesn\’t look much cut up, but there is still plenty of work to be done, hopefully I will have access on Saturday, and I will get it built and ready for use.