Unfortunately the router table I built as a table saw extension has been a fail, it was a design by Jay Bates, and I still like the principle of the build, it just didn\’t work for me, it started flexing when in use, so I was not getting precise cuts, this may well be down to the quality of the hardware, I don\’t think it had anything to do with the design.

That said, I need a router table, it is something I often use, but again I have to think of space, so after days of researching, I decided on a table that bolts on to my workbench, and can be removed and stored when not in use.

Today the project started, I am using my old Bauker plunger router for this, I think it wont be long before the brushes need replacing, but for now it is working, since buying my trim router I have found that it has been used less and less.

First I had to decide on the size of the router table top, I am sure that 30\” long by 20\” from front to back will be more than adequate, it will be bigger than the old one, and that gave me more than enough working room.

The design called for 1\” thick material, but the thickest sheets I have are 3/4\”, I also want to keep the weight down, so I cut the 3/4\” sheet to size, and then cut a strip of 1/2\” ply 30\” x 8\”, to be laminated along the edge, for bolting to the bench, and another piece to be laminated across the middle of the sheet, to let in the router. 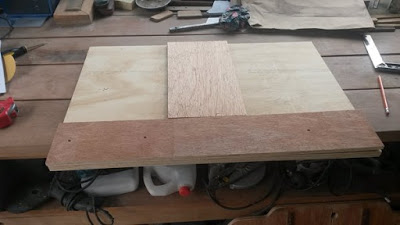 This is a view of the underside, having made sure they were cut to size, I then glued and clamped them to the main sheet, having brad nailed them to stop them sliding on the glue. 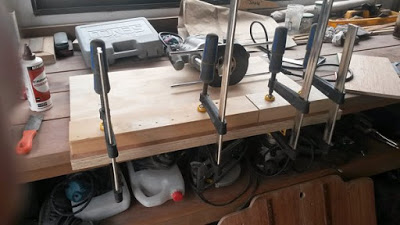 I put some scrap 2×4 under the clamps, to spread the pressure, once they were dry the clamps came off, it was then time to draw the lay-out for the Router. 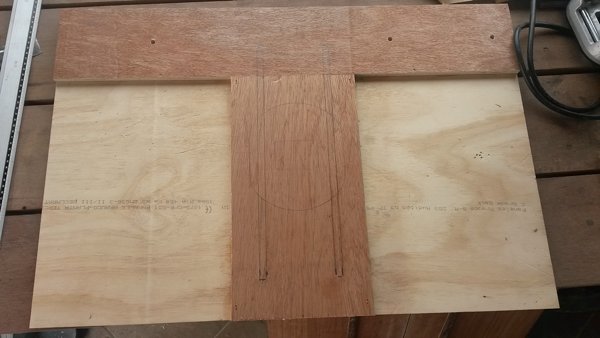 The idea is that the bars supplied with the router will be used to hold it in place, a groove is cut for them to sit in and a piece of wood is clamped over them on either side to stop the router moving, this way the router can be removed from the board in seconds and used freehand if desired.

Firstly I cut out the recess for the router itself, I had to cut just shy of 3/4\”, so I did it in several passes, freehand. 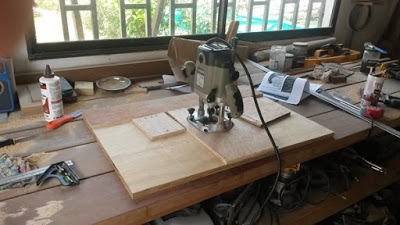 Using scrap ply of the same width to act as supports once much of the waste had been removed, after which I used a bull nose bit to cut the grooves for the bars, firstly in the table top. 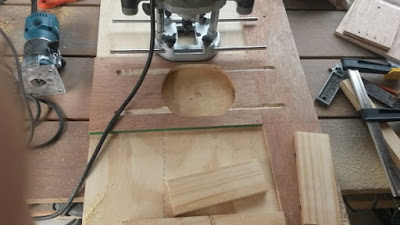 Then in the pine that will be used to clamp the router in place. 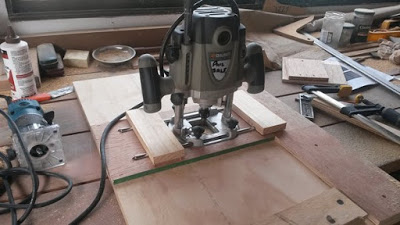 So far so good, hopefully I can get on with it tomorrow.