Today was a day of construction, things have gone together, but not as smoothly as I would have liked. 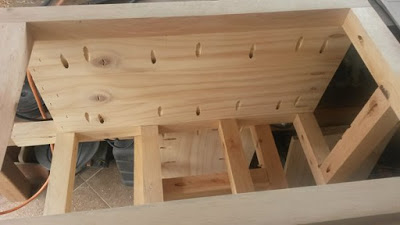 There were a lot of pocket holes to be drilled, all on the inside, so none of them will be seen, those shown here, both attach the boards together, and also outwards, attach to the legs, I also used pocket holes to attach the rails, this was probably a mistake, had I been able to keep to the original plans, it would have been fine, because I could have got my drill inside the frame, but because I had had to reduce the size, I ended up having to manually screw everything together, which took time, I would have been better drilling from the outside, screwing it together, and then filling the holes and sanding again…you live and learn, even after 40 years of woodworking!
This following photo will give you some idea of what the units will look like.

The tops have just been placed on for now, but will be attached with pocket holes from underneath.
You can\’t see it in the photo, but on one of the units, one of the rails moved whilst I was attaching it, unbeknown to me, and is 1/8\” out of square, I thought about dismantling it, but… So I will adjust the drawer fronts to fit, and hopefully no one will notice. I also had a clamp slip, which split one of the trim boards on the side, a nuisance, but I) can resolve that by running my trim router around the sides with a round over bit, which will disguise the damage.
I now have to make the decision on the drawer runners, if I buy commercial ones, I will probably have to cut them down, as they will be too long, the other option is to make hardwood runners, it will take more time, but I have the mahogany her, so it would cost nothing.